I don’t have a picture, but (as a friend pointed out) it’s a good time to post this recipe. We’re finally getting to that point of the year, in Texas at least, where we can get great tomatoes. My little tomatoes aren’t quite there yet, but they’re getting closer every day…check it out: 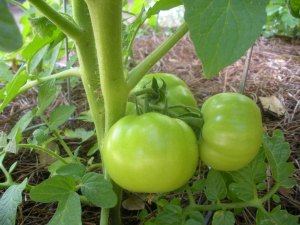 Anyway, this a great easy recipe that you can make in the food processor. Even though I’m letting a machine do most of the work, it looks much prettier at the end if you mince a small portion of the veggies by hand.  That’s not officially in the recipe, but it really is better.

This entry was posted in Recipes and tagged cucumber, Latin, soup, vegan, Veggies. Bookmark the permalink.